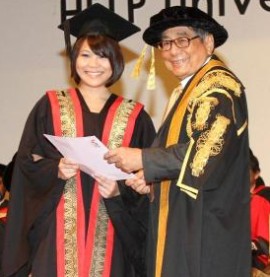 WHEN asked about his initial reaction to being appointed as HELP University’s inaugural chancellor Datuk Paul Leong Khee Seong simply replied: “I felt trepidation and uncertainty … but I have accepted the challenge to play a role in the education sector.”

Leong was officially installed as the university’s chancellor at a ceremony held the day before the institution’s 24th convocation ceremony.

Set up in 1986, HELP University was accorded university status last year, in time for its 25th anniversary.

“Datuk Leong’s devotion, singleness of purpose, steadfastness of character, and nobility of values are exemplary and will inspire and guide us in our endeavours,” he said, when reading out Leong’s citation at the ceremony.
Commenting on his diverse career in fields such as tin mining, politics, banking and media, Leong added that he was looking forward to widening his experience in higher education.

“I am a man of curiosity and I have always been interested in analytical thinking – the way I look at it, learning is a continuous process, and it doesn’t stop no matter how old you are.

“Furthermore, I think HELP University has a good record of producing excellent students and giving back to society,” said the 73-year-old. Leong graduated with a Bachelor of Chemical Engineering from the University of New South Wales, Australia in 1963.

Coming from a family with significant tin mining and plantation interests in the Kinta Valley, Perak, Leong joined the family business after working in the chemical engineering field for a year.

Leong has had a long-standing career in politics, rising from party rank in Gerakan to being the deputy national chairman.

Aside from being a Member of Parliament from 1974 to 1990, Leong was also the former Primary Industries (now known as Energy, Green Technology and Water) Minister between 1978 and 1986. Since retiring from politics, Leong now holds multiple positions in the corporate sector, such as being an independent non-executive director for Air Asia, TSH Resources Berhad, and the Industrial and Commercial Bank of China (Malaysia).

Meanwhile, the day-long convocation event was the first such ceremony since the institution gained its university status.

Among the happy graduates at the ceremony was Joycelyn Ch’ng Li Ern, who not only graduated with a first class honours in the Bachelor of Psychology but also received the HELP University President’s Award.

The award is presented to graduands with the most outstanding academic achievements at the faculty level.

In her valedictory speech, Joycelyn shared her pride at being part of the first batch of graduands since the institution achieved its university status. “This is the time for us to reflect and remember our journey as students, as we set forth into the world,” she added.

Spotted in a jovial mood was Chan Hoi Cheong, who had every reason to smile as he had just graduated with a first class honours in the Bachelor of Communication (Media Studies).

Expressing an interest in world affairs, Hoi Cheong said that he had already received offers to do a Masters in International Relations and Politics at two universities in the United Kingdom.

“Communication studies suits me and I hope to expand my thinking both culturally and socially besides getting a worldly perspective by doing the Masters degree,” said Hoi Cheong. He added that his stint as an intern at Bernama, the national news agency, had helped him tremendously.

“To be in this field, you need to be dynamic and constantly read to update yourself. You have to be curious, ask questions, and think critically,” shared Hoi Cheong.

The convocation ceremony also saw Rosemary Gosling, who is the director of Institutional Liaison, University of London International Programmes at the London School of Economics and Political Science, receive an honourary Doctor of Business Administration from HELP University.