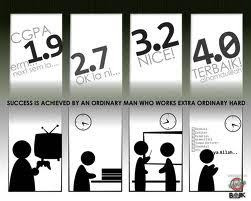 Check out the stories published by nst.com.my recently.

PUTRAJAYA: Some 300 students from five universities will be involved in the Integrated Cumulative Grade Point Average (iCGPA) pilot project, starting next month.
Higher Education Minister Datuk Seri Idris Jusoh said those involved were new students from selected programmes which usually had between 40 and 60 students in each programme.

For students who takes part in this iCGPA project we wish you all the best. For more information about iCGPA project contact the participating universities.