Skip to content
PUTRAJAYA: The Overall achievementt of Ujian Pencapaian Sekolah Rendah (UPSR) students natiowide is the best in four years although straight A scorers have dropped slightly from last year’s.

Director-General of Education Datuk Seri Abdul Ghafar Mahmud, in announcing the analysis of the 2011 UPSR results, said 55.45 per cent of the candidates obtained at least Grade C this year, up from the 54.38 per cent last year.

“This year, the overall achievement of the 2011 UPSR candidates has improved and is the best in four years in accordance with the National Average Grade,” he told a news conference at the Education Ministry here. 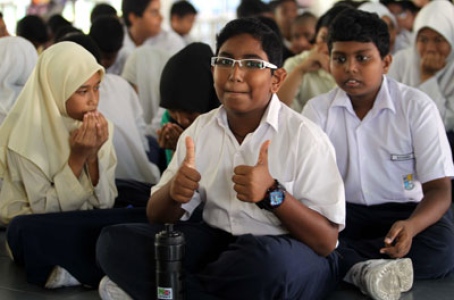 Abdul Ghafar said candidates with the minimum achievement, of a D or E grade, also dropped, by 0.51 per cent, from 3.39 per cent last year to 2.88 per cent this year.

He also said that the gap in the achievement by urban and rural schools was narrower this year, at 0.01, from 0.16 of the National Average Grade last year to 0.15 this year, and attributed this to the various measures implemented by the ministry to assist rural schools.

“I believe efforts by the ministry, such as the School Improvement Programme stated by Deputy Prime Minister and Education Minister Tan Sri Muhyiddin Yassin has had an effect.

“We mobilised excellent teachers to help out in the rural schools. The programme has shown results,” he said.

Abdul Ghafar said 1,329 candidates with special needs sat for the examination this year, and 17 of them scored straight A’s compared to 12 last year. – Bernama